Free time is few and far between here on the farm between homeschooling, having three kids and a daddy working in another city, unexpected surprise of cousins flying in from Hawaii, and trying to adjust to living in a new state.  Since we are living with the grandparents, I also try to prepare all the meals so we aren’t too much a burden on them.  But I am NOT complaining!!!  Life IS good!  Just not conducive to writing blog posts. 🙂

D was home for almost 2 days this weekend and we worked as hard as we could on the chicken house.  We had a HUGE Texas size storm on Wednesday that damaged SO much in the area.  Ripped the roof and door off our neighbor’s barn, peeled back the well house roof, hail damage on a lot of the crops and toppled our chicken run’s overhead netting (to keep out flying predators).  D worked on re-supporting the netting and reinforced the base of the chicken house so that no skunks or weasels dig into my coop!

Since we were going to be around the coop for several hours, we decided to let the chickens have their first chance of complete freedom!  I had read on Backyard Chickens that a good way to introduce them to complete free ranging is to let them out later in the afternoon and they’ll head to the coop as the sun goes down.  It worked perfectly!  They had a ball.  But I must say, they are not too smart.  A couple of them were attacking the side of the house thinking the paint MIGHT be bugs?!?!?!?  And they were ready to return into their house once the sun went down.  D only had one instance of a girl flying out and accidentally scratching him (just missing his eye!!), just because she did not like her new floor! 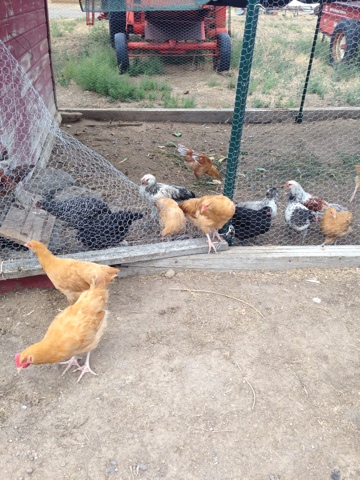 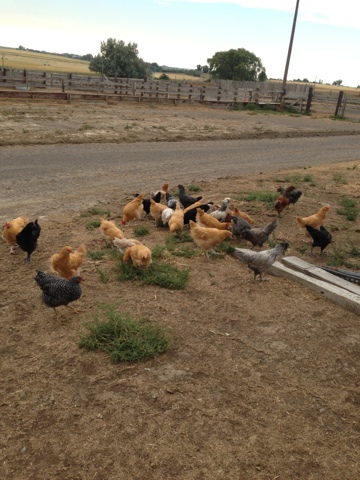 Freedom!!  But they didn’t go more than 20 feet from the house.

Now I did the purely gross work!!  Ugh!  Need some good mucking boots now!  I love my 100 year old chicken house BUT if you are going to build your own coop/house PLEASE make sure your coop drains out your door!!!  Ours is so old, it depressed in the center and sits there.  Does NOT help with cleaning out ALL the poop.  By the time I was finished, I was covered up to my waist. Forty-five chickens produce a ton of it. 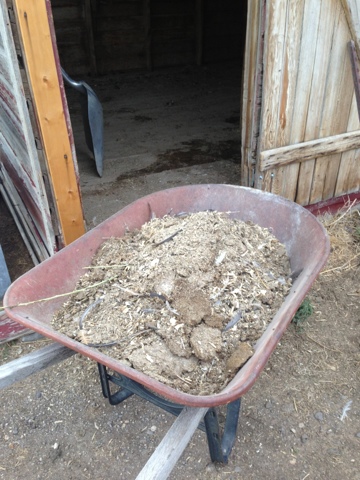 That’s quite the load!

What could I do to prevent from having to do this every month?  A friend of mine on Facebook (initials BH living in Dallas) 🙂 had posted a picture of the inside of her cute backyard coop and she had lined it with linoleum.  After discussing this idea with Grandma Chick, she said it sounds like a good idea!  I had gone to the local ReStore to buy remnant linoleum and bought them out.  Our coop now looks like a patchwork quilt! 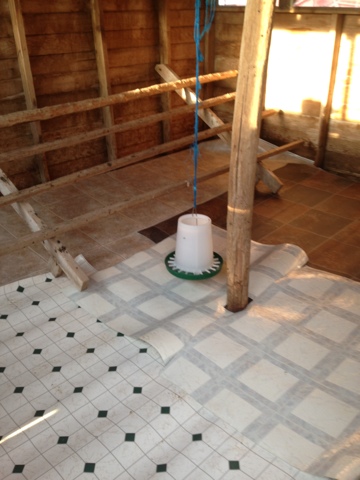 At the moment, my babies don’t seem too thrilled with my choice of flooring.  Too many changes for them!  But it is teaching them to finally use their roosting racks.  So far, they FIGHT each night to fit into the corner that has their door into the yard. Now some are realizing there are wonderful roosting spots in there!  They are true creatures of habit!

After I did that, I spray painted our nest boxes since they were trying rust out of the bottoms.  We’d like them to last 20 more years. 🙂 I had already scrapped out all the old gunk and poked a hole in a couple of them in my overzealous cleaning.  The boxes are now set up in the coop ready for when my girls start to lay in about 6 weeks!!!  Cannot wait!!  Did you know it takes 4-6 months for a chick to start laying eggs??

We also have our cat kennel in there for the baby Black Java chicks.  Supposedly, you can introduce new chicks after the other chickens can hear and smell them for a few days with no problems.  But I guess the size difference is too great between these.  So we let them out only when we are with them and can watch them.  I have noticed only the pretty barred rock hens attack them.  Know now where the term “hen picked” comes from!!  Grandpa Chick is working on building them a small fenced enclosure for when they outgrow the kennel. 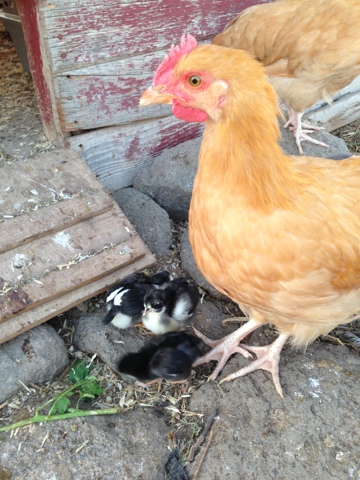 Whew!  That was enough for one day!  But it was so much fun to be able to care for my babies! 🙂 Next big chicken project will be winterizing the coop!  Since it’s SO old, boards have worn down where the prevailing winds hit it and there are no windows.  Will be important for when it starts to freeze at night!

This site uses Akismet to reduce spam. Learn how your comment data is processed.